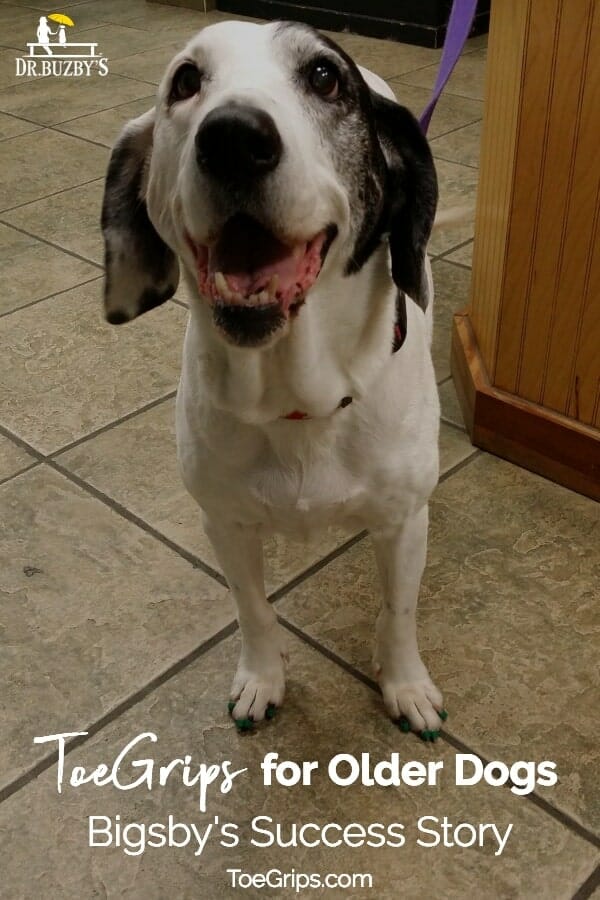 Do you have an older dog whose body doesn’t always keep up with his or her energetic spirit?  The kind of canine whose octane level is turned up all the way? That’s how dog owner Matthew Kline describes Bigsby, his dalmatian/hound mix.  Even at the senior age of 11 years old, Bigsby isn’t happy unless she is active. Keeping Bigsby safe is a top priority and why Toegrips® dog nail grips became part of this older dog’s active lifestyle.

About four years ago, Bigsby was out playing fetch, charged after a ball and tumbled. She flipped right over, which, incidentally, the high energy superstar does all the time. (Matthew describes her as having no sense of self-preservation.) Bigsby had to be carried off the field. She was diagnosed with hip dysplasia at that time. After a few days of medications, she was back on her feet.  The discomfort didn’t slow the senior dog down.

Matthew was concerned about re-injury. He noticed that every time the doorbell rang, Bigsby would amp up her energy and run as fast as she could to see who was at the door. That also meant turning some pretty sharp corners as she ran from one room to the next. One day, Bigsby took a corner a little too hard and ended up tearing the cruciate ligament in her knee.

The injury left Bigsby unable to jump onto the sofa, and it left Matthew worried that his dog could cause more damage to her legs if she continued to sprint to the door every time the bell rang.

The solution? A little ingenuity and ToeGrips® dog nail grips

Matthew solved both problems for his dog. First, he removed the ringer from the doorbell and then he unscrewed the legs off every piece of furniture Bigsby likes to climb on for her nap. That is some pretty creative handiwork! It also shows the deep concern Matthew has for his four-legged buddy and the lengths he will take to keep her safe.

To help Bigsby even further, Matthew brought her for acupuncture treatments after her knee injury. She became integrative veterinarian Dr. Julie Buzby’s patient, and Matthew got an education about ToeGrips® dog nail grips and how they could keep his senior dog from slipping and causing further injury to herself. Bigsby started wearing ToeGrips® dog nail grips right away.

The ToeGrips® dog nail grips are fantastic and definitely grip the floor,” said Matthew. “Bigsby doesn’t slide as much and they are helping her build back the muscles that had atrophied in her back legs. She’s still active, so occasionally the ToeGrips® dog nail grips would slide off. I started using Super Glue to keep them in place, especially for our trips to the beach. That has worked really well.”

Matthew adds, “They are great for her because they give her added stability on our wood floors. The other option would be putting down carpet, which isn’t practical. While they haven’t stopped every crash, because she has no concern for her personal well being, they have stopped 90% of her crashes in the house.” 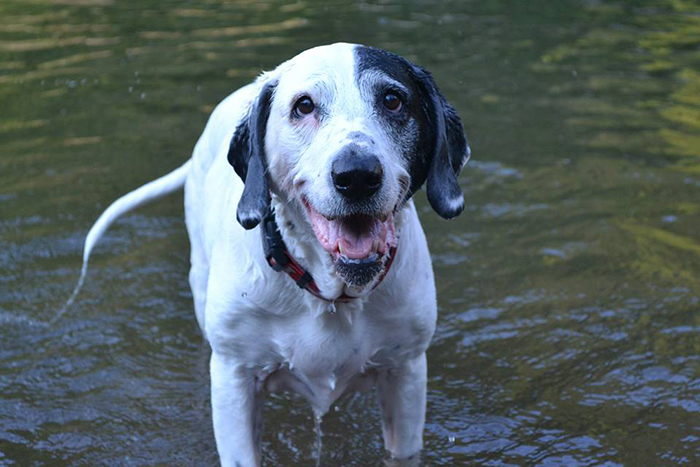 Do you have questions about ToeGrips® dog nail grips for older dogs? We’d love to hear. Please comment below.