Fibrocartilaginous embolism (FCE). Spinal stroke in dogs. It may sound like a gloom and doom diagnosis, but most dogs can improve over time.  Meet Ozzy and read the heartwarming story of his recovery. Then read integrative veterinarian Dr. Julie Buzby’s summation on diagnosis, symptoms, and treatment of FCE.

Twelve years ago, Cristina Enriquez was given an adorable miniature schnauzer for her birthday, and it was love at first sight. She named the little guy Ozzy after one of her favorite rockers, Ozzy Osbourne. With a chuckle, she added that the two of them are nothing alike.

Ozzy has been with Cristina through some very tough times. When he first came into her life, her mom was very ill. She needed something to bring her some happiness and the sweet, smart puppy fit the bill perfectly. “Everybody should have a dog like Ozzy.” she said, “Everybody should experience that level of unconditional love.”

A typical morning ends in a diagnosis of fibrocartilaginous embolism

Ozzy had always been a very happy, healthy, and active dog until a year and a half ago. Cristina was getting ready for work one day, going through her usual morning routine. She gave Ozzy his breakfast and then let him outside for a little while. As soon as she let him back in, Cristina could tell something was off. He wasn’t acting right and wasn’t able to sit. So rather than going to work that morning, she decided to take Ozzy to the emergency clinic, where he was diagnosed with a fibrocartilaginous embolism (spinal stroke in dogs).

What is a fibrocartilaginous embolism (spinal stroke in dogs)? Read about this strange diagnosis from a veterinarian’s perspective at the end of Ozzy’s story.

Ozzy had lost the use of both hind legs and was in the hospital for two weeks. Cristina thought for sure her handsome boy would never walk again. It was a very difficult time for Cristina and her partner as they waited to find out what would happen and wondered whether Ozzy would recover enough to come home. While he didn’t regain movement in his left hind leg, his right hind leg improved quite a bit. He uses that one to lift himself up when he’s lying down and to get around.

Mustering the energy to walk on slippery floors

Ozzy learned how to get around without the use of one of his hind legs, but had a very hard time getting around inside the house because of the tile floors. Whenever he tried standing, his legs would slip and slide all over the place. And because he couldn’t get any traction, his back legs would slip out behind him, hurting his back.

To make it easier on him, they put throw rugs all over the house. That helped some, but Ozzy would hop from rug to rug. He would steady himself on one rug and stay there for a few minutes before moving to the next. It was undoubtedly so he could muster enough courage and energy to hop over to the next one. So although the rugs helped, Cristina didn’t feel they were going to be a good long-term solution. She really wanted to find something that would give him traction on the slippery floors.

Cristina tried booties. Ozzy was already wearing a bootie on the paralyzed foot to keep it from getting scraped. She tried using booties on the other three feet but they were slippery, cumbersome, fairly expensive, and not very durable. So she gave up on the idea of booties and decided to do more research in hopes of finding something that would work. Her search led her to ToeGrips® dog nail grips.

The very first steps Ozzy took after having his new ToeGrips® dog nail grips applied showed an immediate improvement in his ability to walk. (Cristina only puts them on three feet since Ozzy’s left rear leg is paralyzed.) He was able to get around better than he had since his stroke.  He can even stand still now. That’s a very big deal!

“ToeGrips are a godsend. I love them because Ozzy is able to stand in one position without having to adjust himself constantly. And they’re a great alternative to carpeting the whole house.”Click To Tweet

ToeGrips® dog nail grips have made life easier for Ozzy and they have given Cristina a peace of mind that she hasn’t felt in quite some time. He gets around with so much more confidence and independence that she doesn’t worry about him as much. He is once again going in and out of the dog door, which they modified by enlarging it and adding a ramp. Now Ozzy even tries to play with the other dogs in the house.

Exercise, massage, and a healthy dose of family love

Ozzy’s health problems have been emotional and expensive, but he is a much-loved member of the family. Cristina was determined to help her dog recover from the spinal stroke any way she could. Ozzy gets acupuncture every week. Cristina also does massages and range of motion exercises for him at home several times each week. His favorite exercise is getting out for a long walk in his wheelchair, which they do four times a week. And now that he can walk better in the house, if he doesn’t get his exercise on schedule, he makes it very clear that it’s time to go by walking back and forth on the tile floor!

A Veterinarian’s Perspective, by Dr. Buzby 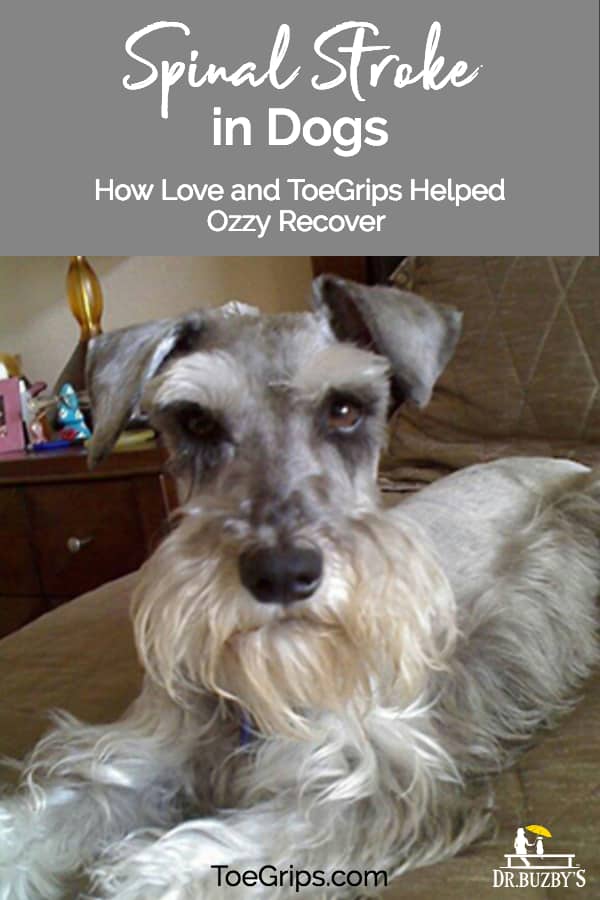 You may never have heard the term ‘fibrocartilaginous embolism’ (FCE), but you may know a dog who has had one, whether or not it was officially diagnosed. It’s one of those fuzzy diagnoses in veterinary medicine for a couple of reasons:

What is Fibrocartilaginous embolism (spinal stroke in dogs)?

Most FCEs occur in big dogs, but dogs of all breeds and sizes can be affected (and even cats). A fibrocartilaginous embolism is thought to occur when the shock-absorbing material inside of a disc (which serve as spacers between the vertebrae of the spinal column) manages to get into the blood stream. There, it blocks normal blood flow to a part of the spinal cord. This “road block” to blood flow is called an “embolism.” Even more fuzzy than proving this diagnosis is the fact that no one really knows how or why it happens.

Blood carries oxygen—necessary for the survival of cells and tissues. Without blood flow to an area of the spinal cord, tissue dies. We call that an “infarction.” The degree of damage depends on where the obstruction occurs and how severe it is.

The infarction will manifest in neurologic symptoms—partial or complete paralysis. Half of the time, only the hind legs are affected, and usually one side is worse than the other. Sometimes only one leg is affected.

Symptoms of fibrocartilaginous embolism in dogs

A dog with a fibrocartilaginous embolism will have some telltale clues. Here are the big three: the condition comes on suddenly, doesn’t continue to get worse over time, and is not painful for the dog (except maybe right at the very beginning).

I mentioned the other common diagnosis that affects a dog similarly called intervertebral disc disease (IVDD), where the disc infringes upon the spinal cord’s personal space, affecting nerve transmission. But unlike FCE, IVDD is usually painful (but not always) and can get worse with time.

FCE is not a gloom and doom diagnosis

Sometimes FCE is thought of as a gloom and doom diagnosis, but I don’t feel that way about it. Should your dog be diagnosed with FCE, consider this:

Don’t give up! Most dogs with FCE can improve over time

Finally, these dogs usually get better! After 24 hours, symptoms don’t get any worse. Then, most dogs with FCE improve over time, especially with proactive, hands-on nursing care. Improvement occurs over days, weeks, and sometimes even months, after the initial damage, so don’t give up! Ozzy’s family did not give up, and their result was positive for Ozzy and for their lives. Their message of hope is inspirational for all of us who love our dogs and would do anything for them!

Passionate about pets and their people, Therese Kopiwoda is the founder of ThePetScopeTV, the first live-streaming network on Periscope featuring broadcasts from experts in the pet industry. She’s also a social media consultant, WordPress web designer, and speaker. Therese is mom to a border collie Jed, who is her best friend and travel companion.